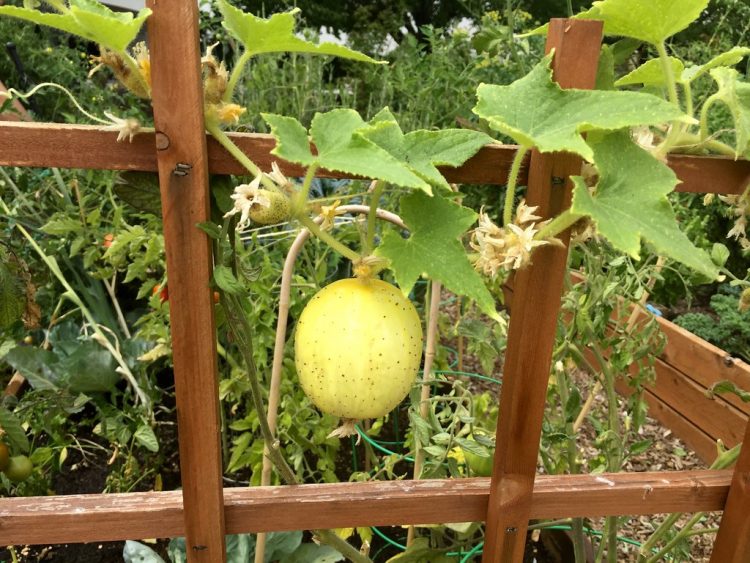 Lemon cucumber, scientifically known as Cucumis sativus var. sativus is also known as yellow cucumber, Garden Lemon, Apple cucumber, Budamkaya, Crystal Lemon, Crystal Apple locally in many regions. It has its origin in India and the Middle East countries from the 16th century.

It is a part of the gourd family, which includes melons, cucumbers, and squashes. Although it gets its name from the yellow lemon color of its skin, it does not have a similar flavor to lemons.

Lemon cucumbers are a small, round to oval-shaped fruit, yellow in color. They are approximately 5-7 centimeters in length and often have a small protrusion at the blossom end, somewhat like a navel orange.

Although the skin of the fruit is light green during its early days and closely resembles a lime, it will turn a golden yellow when the fruit is ripe

The inner flesh of this fruit has a similar consistency and appearance to traditional cucumber with edible seeds and has a mild, sweet taste with a cool, crisp texture.

However, the flavor is slightly sweeter than the bitter, earthy flavor of traditional cucumbers.

The round cucumber is high on its water content and is a fruit that is rich in vitamin A & C, iron, and calcium.

Lemon cucumber offers quite a few beneficial nutrients and they also contain antioxidants with anti-inflammatory properties making it a great choice for salads and pickles.

How to Grow a Lemon Cucumber

Lemon Cucumbers thrive in the heat. It needs good sunlight and temperatures between 65-75 degrees.

Space 36 to 60 inches apart, depending on the type. If you’re trellising vines, space plants 12 inches apart.

Give Them a Trellis

Cucumbers love to climb, so we put up a sturdy trellis to grow up. We alternate planting on both sides of the trellis so the weight will be balanced.

Cucumbers need moist and nutrient-rich soil. The soil needs to be well-drained so that the roots and seeds do not rot. Soil pH should be 6.0 to 6.8.

Watch for pests, such as aphids and spider mites, which are usually easily controlled with an insecticidal soap spray.

Handpick any squash beetles that might crop up. Avoid pesticides, which kill beneficial insects that work hard to keep pests in check.

Mulch soil to reduce water evaporation, but wait until the soil has warmed before covering it.

Pick cucumbers whenever they’re big enough and have turned deep yellow. Check vines daily as the fruit appear because they enlarge quickly.

Use gloves to rub the outer tender skin to remove any remaining prickly spikes.

The more you harvest, the more fruit the vines will produce. Oversized fruit is bitter. Cucumbers with a yellow end are overripe. Harvest using a knife or clippers, cutting the stem above the fruit.

Cucumber is damaged by light frost (28º F to 32º F). If a surprise late spring frost is in the forecast, protect seedlings with a frost blanket.

Inadequate or inconsistent moisture causes oddly shaped or poor-tasting fruit. If plants suddenly wilt and don’t recover, the vine has been infected with bacterial wilt, spread by cucumber beetles.

If you’ll use cucumbers within 1 or 2 days, store at room temperature. Exposing cucumbers to temperatures below 50º F can hasten decay. If you must refrigerate cucumbers, wrap them in a dry paper towel and slip into a loosely closed plastic bag. Store them in a warmer part of the fridge and for best flavor and quality, use within 1 to 3 days.

How to Eat Lemon Cucumber?

You can eat lemon cucumbers raw, add them to salads, pickles, and smoothies.  We have some recipes that might help you make some lip-smacking dishes.